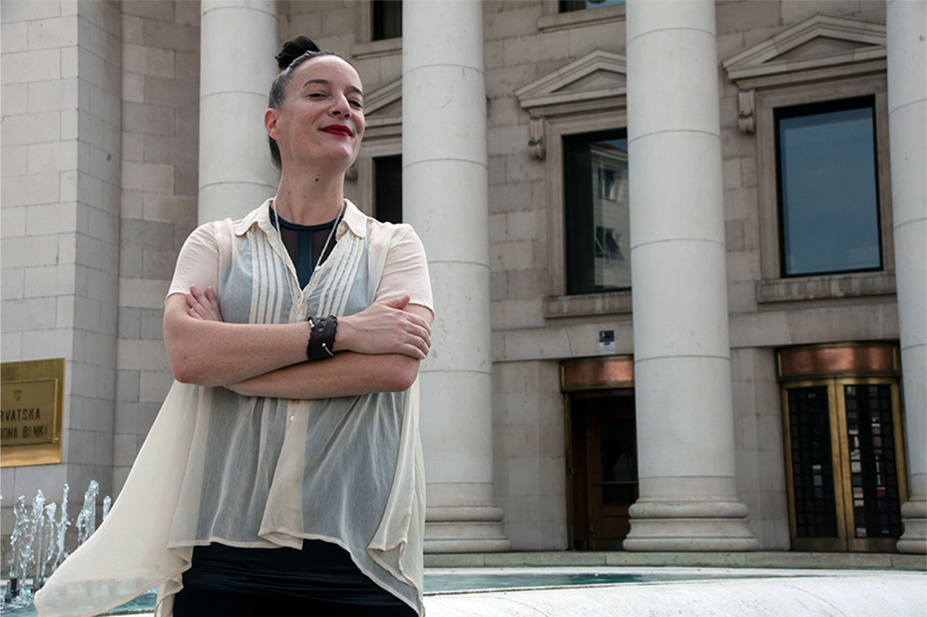 I graduated in Political Science at the Faculty of Political Science in Zagreb. During my studies, the office of Amnesty International Croatia was an ideal training ground for youth ideals, but also for practising communication skills in the form of writing appeals full of enthusiasm, encouraging citizens to be more aware of human rights and participating in lobbying. Volunteering at AIH introduced me to working in the NGO sector, but as writing and listening to stories have always been my greatest passions, that further strengthened my decision to try my best at journalism.

I got a job as a journalist in 24sata/Večernji list newspapers. Working in the newspaper was an amazingly colourful world of adrenaline that still amazes me. Suggesting my topics, creating stories, finding interlocutors that are hard to come by, as well as actively participating in putting together the visual identity of the newspaper was exciting and creative work that was the ideal preparation for my next media challenge – PR manager of Only Men Stuff advertising agency. I was the only woman in Croatia who was in charge of media coverage of Croatian MMA league, and later European MMA league.

After that PR success, I worked as a freelance PR consultant for two years. As a politologist, I was interested in the media campaign and I had volunteered for the organization, and later the emerging political party – the Workers’ Front in 2015. (just one example is the successful online and offline campaign against the privatization of the Institute of Immunology in Zagreb, as well as many other provocative actions). I participated in the propaganda work of the Stop TTIP initiative and prepared members of the initiative through media training for public appearances. I led the entire PR for the Premier Boxing League in cooperation with OnlyMenStuff agency and the Croatian Boxing Association.

The last time I returned to my old love – journalism was in 2017. when I wrote for Telegram.hr. After that, I decided to wash the hands of journalism and move to Berlin. For two years I lived and worked in this amazing city where the turbulent history of the 20th century was created. In addition to photographic and PR work for the small gallery Voodoo55 in the Berlin’s art district of Wedding, as a tour guide in English, I led walking tours around the most famous parts of Berlin. I had the freedom to create the content of my walks, which was a challenge that brought me back to the beauty and magic of storytelling.

Talking about the turbulent past of Berlin, showing the canal where Rosa Luxemburg was killed, talking about the last days of Adolf Hitler and Eva Braun in an abandoned parking lot under which Hitler’s bunker is hidden, visiting in silence the Holocaust Memorial next to the Branderbug Gate, remembering Hannah Arendt and her’s banalitiy of evil as tourists enter the Topography of Terror for free (a documentary center on Nazi crimes located on the site of the former Gestapo building), coming to the remains of the Berlin Wall and remembering people who perished in vain attempts to flee to the West Berlin, recounting testimonies of old Berliners who remember the terror of the Stasi, going to Treptower Park where the impressive Memorial to the Soviets is located as a symbol of antifascist victory, but wondering how Stalin’s head and some of his lunatic quotes still stand there, coming to Schöneberg City Hall in front of which Kennedy stated his famous ‘Ich bin ein Berliner’ sentence, after all that vertigo of history and ideologies, human suffering and struggle, peace is finally found in one of the bars where Iggy Pop and David Bowie partyed and created their music. Cause, We Could Be Heros Just For One Day.

Two exciting years in Berlin were enough to make me want to return to my beautiful country. And to tell fascinating historic stories that have not yet been told in Zagreb, the city in which I was born. This is how the Walk with Tito was created, which tells the story of antifascist resistance in Zagreb during the rule of the nazi puppet state NDH, Partisan victories, the role of Josip Broz Tito, the creation of socialist Yugoslavia, its successes and abysses, and an avant-garde time that disappeared in the bloody disintegration of Yugoslavia in the 90s.